On 23 September 2022 the City Law School held its Research & Enterprise Day on the theme of Legal London. The event was an opportunity to highlight the research, teaching and scholarship at City Law School and to develop links across the University, professions and the wider community.

I have often amused myself with thinking how different a place London is to different people. They whose narrow minds of some particular pursuit, view it only through that medium… But the intellectual man is struck with it, as comprehending the whole of life in all its variety, the contemplation of which is inexhaustible.

Over the centuries London has re-invented itself, both out of external necessity and internal hubris. Today is no different. Over the recent past, London has been caught between its role as a global city and the capital of an increasingly parochial country. Refusing to compromise on either, London is in a state of transition; political, cultural, financial and topographical. Legal London investigates the nature, meaning and significance of this moment through consideration of the city’s past, the impact of the presence and the possibilities for the future. City Law School is in a unique and privileged position to conduct this project. The character and identity City Law School is closely tied with London. City is a College of the University of London; the Lord Mayor of London is the University Rector; the Law School’s history stems from the Inns of Court School of Law; and as a school focused on businesses and the professions, it has close links with businesses and law firms in London. Given the importance and relevance of London to City Law School and its global image, the Research and Enterprise Day focussed on London as both a global legal city and the local capital of England, along with the relations between them. We had an engaging and productive day discussing this moment in London’s history through the prism and impact of law, widely understood. Legal London included speakers from City Law School and invited guests from academia, businesses and the community to discuss the role of London in a broad range of fields.

The first panel, chaired by Jessica Corsi (City Law School) focused on London and Legal History. David Seymour (City Law School) presented his work on Land Law and the Topography of London. He showed how London has been shaped in a very real and topographical sense, by its land law. Taking the case of The Duke of Bedford Estate v The Trustees of the British Museum (1822), he explored the ways in which the economic and social relations underpinning London’s expansion can be  read both from the facts and findings of the case along with the layout of London and the design of its buildings.   John Stanton (City Law School) discussed his work on local government in the UK and its relevance to London. He highlighted the history of London’s governance stressing the ways in which its jealously guarded autonomy has impacted its contemporary forms, most notably the conflicts with central Government and the reappearance (after a short period) of the position of the Mayor of London.

Cassandra Wiener (City Law School) presented her work relating to policing responses to domestic abuse in London and the UK. Wiener showed how, since the late 1980s in London specifically and in England and Wales more generally, the state has been prepared to recognise ‘domestic violence’ as no different to any other kind of violence, and to prosecute it accordingly. The presentation outlined some of the more progressive developments in the criminal law to take account that domestic violence is qualitatively and quantitatively different from other crimes. 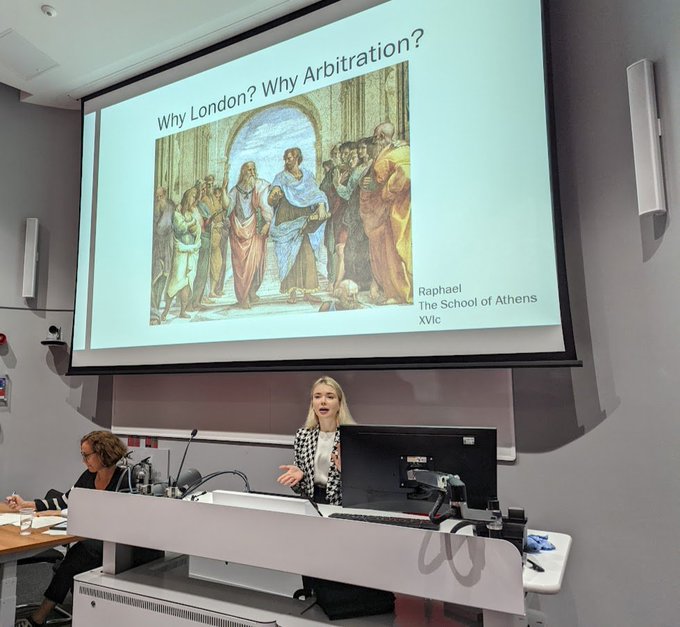 The second panel, chaired by Nina Boeger (City Law School) examined London as a Legal Centre. London is often presented as a ‘centre’’in terms of commerce, finance, and law, and this panel examined some of the implications of this. Marcus Soanes (City Law School) gave a historical account of how London emerged as a commercial centre over the last thousand years. He discussed this emergence within the dialectic of London’s role in creating a universal language, practice and meaning of international trade law and the particularities and power of Empire. Ronen Palan (School of Policy & Global Affairs, City, University of London) explained how London became a financial centre. Diana Filatova (City Law School)  explored the contemporary development of London as the leading centre of international arbitration along with its advantages over both other leading cities and of the more traditional role of courts.

Over lunch, we were joined by Liberty Melly of the Migration Museum based in Spitalfields, London. Liberty spoke to us of the lived experience of the many generations of migrants who, coming from all parts of the world, have made their lives in London. 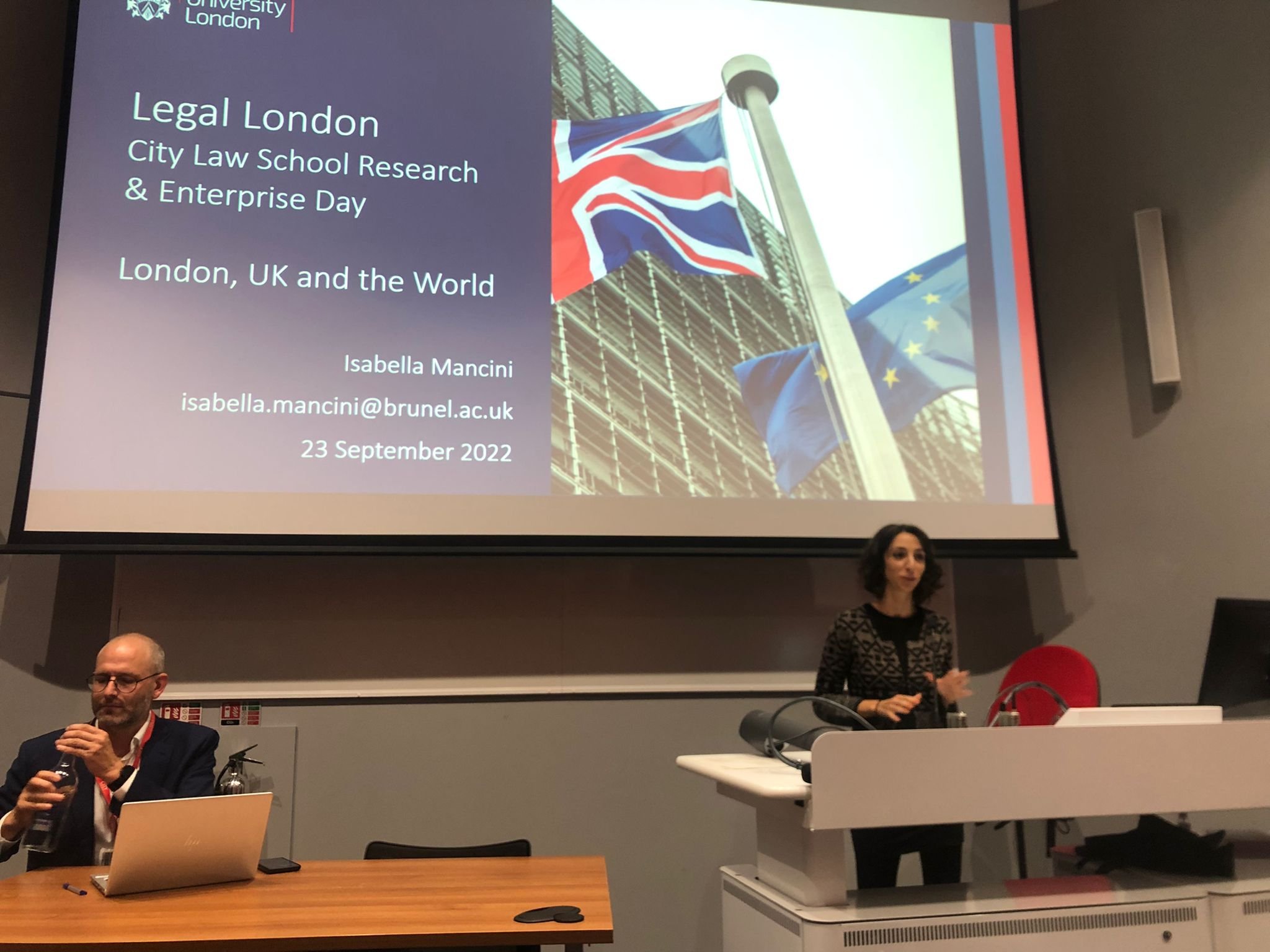 The third panel, chaired by  Jed Odermatt (City Law School) looked at the relationships between London, the UK and the rest of the world. Elaine Fahey (City Law School) presented her work on digital trade and data flows between the UK, focusing on the UK-EU Trade & Cooperation Agreement. David Collins (City Law School) assessed the UK’s trade policy after the UK left the European Union. He paid special attention to Britain’s role and potential through discussion its membership of the WTO, of Free Trade Agreements and the CPTPTT.   Isabella Mancini (Brunel University London) continued consideration of London’s financial relations  after Brexit with a discussion on the new arrangements between the UK and EU  Parliaments now embodied in the Trade Cooperation Agreement.

Tamara Hervey (City Law School) chaired a panel focusing on London’s relationship with slavery and the legacy of empire. Sandhya Drew (City Law School) presented her research on the UK’s Modern Slavery Act (2015), examining some of its flaws in a historical perspective. Deepanshu Mohan (O.P. Jindal Global University) brought in an economic perspective and discussed the role of law in Imperial India. Richard Meeran (Leigh Day) discussed his work on bringing human rights accountability for corporate actors involved in human rights abuses. He illustrated the ways in which those harmed by the behaviour of British-based Corporations abroad are increasingly seeking redress in London courts. 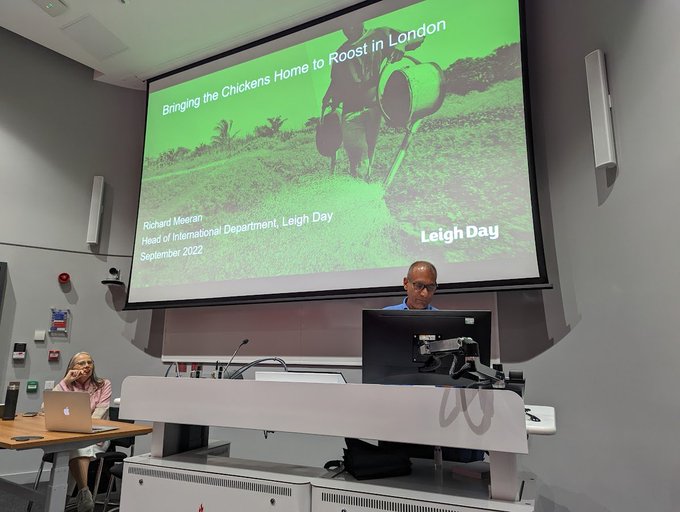 Richard Meeran, Bringing the Chickens Home to Roost in London

The Research and Enterprise Day finished with a roundtable discussion on London and Legal Education. The panelists were Richard Ashcroft (Dean, City Law School), Tamara Hervey (City Law School) and Emily Allbon (City Law School). The panel reflected on some of the themes discussed during the day, and how they relate to teaching in an international and multicultural environment such as City Law School. Legal education should no longer be a one-direction passing of knowledge to students, but a more interactive and shared experience.

Over the coming days and weeks, we will be publishing some of the talks on the CLS blog. If you are interested in participating in future events around the topic of Legal London, please contact David or Jed.