CityLIS Student Perspectives: When Librarians and Archivists Get Radical by James Hobbs

***
This post is by our CityLIS student James Hobbs. Here, James reports on some of the issues arising at the recent Radical Voices conference, which took place at Senate House, on March 3rd, 2017. Radicalism and the drive for change can take on many forms in the world of libraries and archives, and the packed room for the Radical Collections: Radicalism and Libraries and Archives conference, which took place at the Institute of Historical Research at Senate House Library on 3 March, heard arguments that covered some ground.

Across four panels, the themes tackled included how collections are being developed, catalogued and organised, and who works in them and uses them. These were interspersed with not one, but two fire alarms to keep us on our toes, which led to impromptu networking sessions on the street outside, resumed at the end of the day with wine and nibbles in the Institute of Historical Research common room.

Starting out, Wendy Russell from the British Film Institute archive explored the barriers faced by the director Ken Loach in the 1980s when his TV series for the new Channel 4 about trade unionism, Questions of Leadership, was commissioned and then scrapped, and considered the archive’s significance beyond the fields of TV and film. Lisa Redlinski and John Wrighton of the University of Brighton spoke about the remit of HE libraries with particular relation to the library’s digitisation of Brighton’s rich history of underground and alternative press. And historian Lucas Richert (University of Strathclyde), in his paper about radical psychiatry, LSD and MDMA, raised issues (among others) about how funding from private and public sources can affect the consumption and “selling” of archives.

Julio Cazzasa talked about the problems faced by the Senate House Library’s collection (the Heisler collection of 50,000 items tracing labour and progressive political movements, for instance, is a mixed library and archive collection). Alycia Sellie (CUNY) raised questions of the whiteness of librarians and how collection practices should strive to be radical in relation to the Wisconsin Historical Society’s newspaper and periodicals collection. And the discriminative nature of library classifications (it took the Library of Congress 18 years to remove the subject heading “yellow peril”) and the need for a focus on critical theory in LIS studies were just some of the issues picked up by Gregory Toth of the Senate House Library.

After a lunch interrupted by the fire alarm, Mairéad Mooney (University College Cork) looked at British imperialist influences on libraries in the early days of the Irish Free State, and Amy Todman (National Library of Scotland) spoke about the archiving of Engender, the Scottish feminist organisation, since the 1990s. Siobhan Britton (University of Brighton) explored issues surrounding the collection, preservation and accessibility of zines in libraries. (My thanks to her about a lightbulb moment I had midway through her talk when I had an idea regarding my own dissertation.)

Tamsin Bookey (Tower Hamlets Local History Library and Archives), who navigated the rude interruption mid-presentation by the second fire alarm, described moves in Tower Hamlets to widen participation and attract hard-to-reach potential users (respect people who are hostile, use marketing, get non-gender specific toilets). Katherine Quinn (University of Warwick) spoke about the challenge of radical librarianship in the HE context (the audit culture, and how LIS is drawing on management culture), and, finally, Kirsty Fife (National Media Museum) and Hannah Henthorn (University of Dundee) described the issues they, as marginalised people, faced as they negotiated their way into the archive sector and how the expense of qualifications restrict diversification. 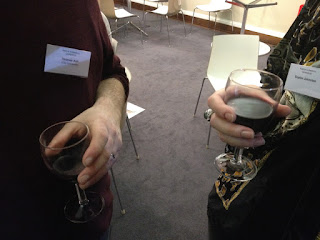 Just how radical some of the ideas discussed really are is debatable. In a point raised by our own Thomas Ash, the non-discriminatory nature of classification terminology, for instance, is evolutionary rather than revolutionary. It’s simply how things should be. A theme running through the day, it seems to me, was that obstacles put in the way of opening up access and information to all – and that really does mean people who currently wouldn’t dream of setting foot in a library or archive – need dismantling, and that means they won’t be the quiet, safe places they are generally perceived to be now. White western patriarchy has had its day. That change seems more sensible and representative of the UK as it is than radical. But the conference provided a great variety of voices that asked questions and offered solutions that deserve deeper and longer consideration – and action.

You can track Radical Voices on Storify for much more insight and detail on the day’s events than I can manage here. And for more about the Radical Voices series of events at the Senate House Library, see www.senatehouselibrary.ac.uk/radicalvoices.

***
You can follow James on Twitter: @jameshobbsart and read his professional blog James Hobbs.
If you would like to find out more about radical librarianship, please join us at CityLIS on Monday 20th March from 5.15pm, when Binni Brynolf and Simon Barron will lead an informal discussion for our AfterHours series, titled: We hunt in packs.. More->

Dr Lyn Robinson is Reader in Library & Information Science, and Head of Department at City, University of London. She established and directs the Library School, and co-directs the Centre for Information Science alongside Prof David Bawden. Contact: lyn@city.ac.uk
View all posts by lyn →
This entry was posted in Student Perspectives and tagged CityLIS, Events, radical librarianship. Bookmark the permalink.