This post is by current #citylis student, Mariana Ou, and is the second part of a series of three reflections on her Independent Study about Library History.

In the part i of this series of posts, I have briefly introduced the field of library history in its values and problems, with the promise to come back to talk about some historians who had been expanding library history by diversifying their inquiries and looking more broadly to the library’s social milieu. And here I go:

History in general has become a much more diversified discipline throughout the twentieth-century, owning greatly to the Annales school and their introduction of culture, anthropology, microhistory and many other themes to historical inquiry. And library history, it seems, has been benefiting from this widening trend. In his 2016 essay The Library as History, German librarian Elmar Mittler confirms that ‘Library history is an expanding area of research’, and that ‘The main focus of library history is changing with new research methods and the interests of cultural history. Library history as institutional or organizational history is really only of minor interest. Rather, the relevance of the library as part of the history of different fields of study is coming into greater focus’.

This is in consonance with the previously explored Jesse Shera’s ideas about library history as valid only if it considers the culture where the library is both part and agent of. And to be able to do that, the historian has no option but to resort to the history of other disciplines.

An active member of the group of library historians who had been widening the field is American author and academic Wayne Wiegand. One of his most preeminent works is what is considered the best biography of Melvil Dewey written so far, 1996’s Irrepressible Reformer; even though it is a research concentrated on an important figure, it is far from being a descriptive, gentle biography—quite the opposite, as Wiegand didn’t shy away from the man’s more controversial characteristics and actions.

In an assessment of decades of library history in America, Wiegand has recognised that many of the limitations of studies in the field can be attributed to an assumption by library historians that libraries are simply ‘good’ institutions, to be investigated ‘from the inside out’:

To stretch a metaphor, they generally study the history of individual trees with little attention to the ecological patterns and changes in the much larger forest in which these trees are rooted, grow, and survive, prosper, or die. And because librarianship itself has not generated influential or significant theoretical perspectives (it is focused mostly on process, seeking to answer “how” rather than “why” questions), American library history has lacked theoretical diversity. 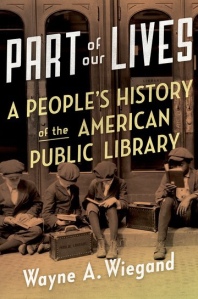 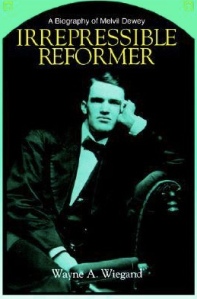 In his most recent and fascinating book, 2015’s Part of Our Lives: A People’s History of the American Public Library, Wiegand traveled all around the country to capture librarians and mainly users’ views, memories, and experiences of the public library, in a ‘bottom-up’, ‘library in the life of the user perspective’ to the history of the American public library—an approach which, according to the author, allowed him to ‘shift the focus from issues of information access to include analysis of the competencies and skills public libraries helped users develop that fostered sociability and invited community involvement’. His history of the public library, then, is ‘primarily about people’ who used these libraries’ spaces in the most various ways and the reading they were able to obtain from them. And concluded: ‘From a “library in the life of the user” perspective, public libraries have put cultural participation on public display’.

In the UK, scholar and author Alistair Black is one of the most significant names in recent library history and great enthusiast of a more diversified disciplinary field. His perceptions of what it had been and what it should be match Shera’s, as he recognises a valuable library history as the one that engages with debates on social processes; as he wrote in A New History of the English Public Library: Social and Intellectual Contexts 1850-1914: ‘Too frequently researchers have taken the documents relating to a library, or group of libraries, and examined them with a view to producing a mere chronicle, bereft of references to non-library influences. Such an approach misses the central purpose of library history, which should not be pursued for its own sake, or for the glorification of individuals and institutions, but for the comprehension of social processes, historical and contemporary’.

The strong focus on public libraries in his extensive work in library history is no aimless choice. Just as Wiegand, Black also thinks there is a certain idea of the public library as an institution that is simply ‘accepted’, with no political commitment, which really impairs historical inquiry. Instead—and interestingly, like Wiegand, also using a tree metaphor!—he affirms:

The public library has never been a self-contained institution. As argued above, its numerous cultural roots spread far and wide. …[It] has successfully emerged over the past century and a half as an integral ingredient of the social fabric of our villages, towns and cities. It is ingrained in our cultural folklore. Historians of the public library are consequently best advised to view their subject as a part of, rather than apart from, society.

And that is the reason that ‘there is no reason why libraries should not be examined with reference to the history of leisure, or urbanization, or ideas, or class, or social policy, or the economy, or culture, or central-local government tension, or social space, or professional-expert discourses, or any other issue’—being that the exact approach Paul Hoare and himself used in the edition of the lovely volume III of the Cambridge History of Libraries in Britain and Ireland 1850-2000, where one can find articles on the political roots of the ideal of public libraries, on libraries as leisure, on public library services for children, on libraries in relation to urbanisation processes, on women in libraries, on working-class and public libraries, and many other themes that borrow from other disciplines to paint deeper picture of libraries in historical perspective.

My take: Public libraries can function as both starting and ending point of historical research; you start from there to establish your inquiries, then explore the diverse surrounding fields of interest, to finally be able to come back and understand the library in its comprehensive nature. I am very interested in what the activities of people (librarians and users) in public libraries can reveal of the social and cultural milieu, and how can we capture these experiences that are often very personal and limited.

This post is an edited version of the original which was published on the author’s blog on 31st March 2017.

If you are interested in studying Library and Information Science, our next Open Evening is on June 14th from 5.30-7.30pm – you can book your place here.