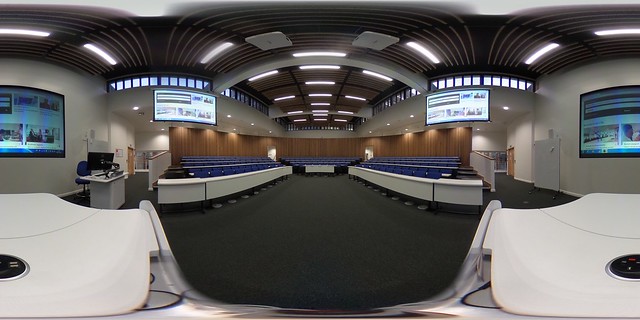 Last month saw the opening of B200, a new lecture theatre in University Building that is set to become one of City’s flagship learning spaces. The theatre is now live, with the first timetabled lectures having already taken place. Explore B200 from a presenter point of view in the 360° photo above.

Positioned above the new main entrance to the university, this space was previously host to ‘The Hub’, a Graduate Centre within the library (as shown below)

Now a light and airy amphitheatre-style space, B200 is set to provide an inspiring learning environment for staff and students alike.

There are other lecture theatres with ‘horseshoe’ style seating across City, notably R101 in the Franklin building and several of the Cass theatres at Bunhill Row, but B200 is by far the largest of them all.

The development of B200

B200 has been under development for several years. Driven by Properties and Facilities (PAF), the project was guided by the LEaD-facilitated Learning Spaces Group (LSG). This multi-stakeholder forum includes academics and professional services staff from across City, and is designed to provide expert guidance into learning spaces developments. Staff can register an interest in joining the LSG here.

In previous surveys on the topic, many staff have prioritised lecture theatres that are suitable for group work and student collaboration. They have also asked for bright spaces that are well laid out, and which have good quality acoustics and controlled room temperatures. This feedback was taken on board when planning this space.

Initial designs had orientation of the room facing the opposite direction to how it is now, as well as fixed seating in straight rows. Although this design would have made for a large capacity room, it could have negatively impacted on sightlines for some audience members and with the main entrances to the theatre being on either side of the stage front, this also had the potential for being disruptive for teaching sessions. LSG members then considered the classic amphitheatre style layout as an alternative, as shown in this image from a production manual for TEDx events. This was agreed as better for audience sightlines and settled on as the format for seating layout, although the final design would be altered in order to fit into the available space. 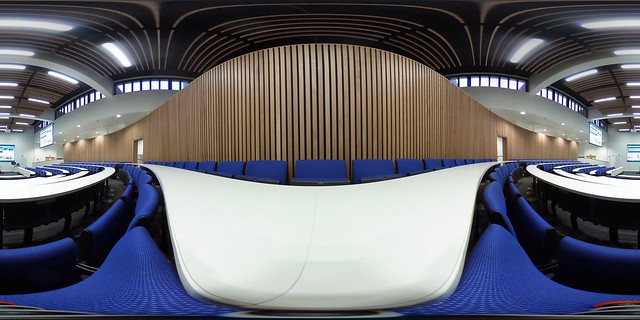 Explore B200 from an audience point of view in the 360° panoramic photograph above.

This blog post is the first in a series of two. The second post, due in early 2017, will look at ideas for teaching in a space like this.

This space is now a lecture theatre, and was previously used as a graduate study centre. However, it has had a longer life than that.

When current Learning Spaces theme lead Sheila Egan was introducing the space at a recent LSG meeting, we discovered another use of it from one of our longstanding academics. As part of the ‘Rock Goes To College’ TV series, the BBC brought prog-rock-turned-new-wave act After The Fire to City for a live concert in what was then the Student Union bar. Watch ‘Live In The City’ from that 1980 performance below, filmed in what is now B200.

Thanks go to all whose ideas fed into the development of this space, including members of the LSG and former LEaD Learning Spaces staff (Annemarie Cancienne, Kate Reader, Stef Smith and Jorge Freire).

This post was coauthored by Santanu Vasant and Dominic Pates.

Photographs taken on Ricoh THETA S using the Flickr tag equirectangular to create the 360° panoramas above.