This is the fifth in a series of six posts about LEaD’s investigations into introducing wireless collaboration technologies to City learning spaces. It provides further reporting on a visit to mLearn 2018, as well as reflections on being mobile in America, and some additional flavours of Chicago.

I took brunch in Concordia University’s cafeteria on arrival for the first day’s pre-sessional workshops. The general hubbub of the place, with its all-you-can-eat buffet style dining and the hollering of the college sports players, took me back to my last time in the US – an undergraduate exchange programme at the University of South Florida in 1994. America has changed a lot since then. As have I.

mLearn 2018 began for me with two pre-event workshops. Rob Power ran the opening one, with a workshop on creating Augmented Reality (AR) treasure maps, an activity that he uses for teaching a course on mobile learning. Commenting that he likes to use free tools that everyone can access, he demoed creating a map image itself in Canva, then building the interactive elements using HP Reveal (formerly Aurasma). Using Blackboard Collaborate, he brought some of the remote participants into the workshop and claimed a combined use of Adobe Connect’s breakout rooms with AR maps. I couldn’t quite put the two together myself, but there is evidently an interface somewhere between augmented reality and online meeting space.

Dr Helga Hambrook of host institution Concordia University then kicked off the first of a three-part workshop, collectively focused on gamification. The initial one was intended as an introduction to gamification, as a method to be deployed for enhancing existing educational activities. Hambrook made reference to Indiana University professor Lee Sheldon, who had replaced regular assessment with ‘experience points’ as a different means for students to cover their curriculum, and introduced Jane McGonigal as a good source for using gamification for problem solving. Participants were encouraged to go into Chicago during the conference and find out more about aspects of the city and its history. Information gathered was then used in the second part of the workshop, to plan and design a game based around Chicago and using the mobile quizzing tool Kahoot! Part Three involved testing the app and playing the game. Although it was a challenge at times to keep up with everything, I felt that it was a bold and worthy set of activities to consider running at a conference and made all the more likely to be meaningful to participants with the size of the event.

I was keen to hear from Chicago’s own DePaul University on Day Two with a talk on their Mobile Learning Initiative (MoLI), as presented by Alexander Joppie and Erin Kasprzak. This was a whole stack of lessons learned from the working group that was put together to promote mobile learning within their urban university, all done without an app development team.

Staff-driven from the offset, MoLI began by defining their mission and followed that with a literature review. They worked with early adopters, shared best practices and ran faculty training workshops. That led to working more closely with faculty, on consultations and supporting projects. They then developed a process for vetting mobile apps, which included whether the developer had a sustainable business model, what their approach to data security was like, whether they were platform-agnostic or not, and finally whether other universities also used them. Their talk raised the question of whether all instructional technologies now need to have a mobile component, or whether mobile learning was still relevant as a standalone category. Below is a recreation of their taxonomy of mobile learning apps that could be used in such initiatives. What would you add to this taxonomy?

Most of the activities happened on Day Three. Inês Cortes Da Silva gave a virtual presentation live from Brazil on teachers’ perceptions of using mobile devices for educational purposes in a Brazilian public school. The school had very limited provision in terms of technologies like PCs or Internet access, but almost 90% of students had some sort of smartphone, mostly running some version of Android and with their own mobile connections. Teachers used smartphones for lesson planning and for helping students to do research. Students mostly used their devices for Internet browsing, image editing, dictionary apps, or for the calculator. Projectors were not commonly available, so teachers sometimes had to buy their own.

When asked, none of the participants in Da Silva’s study felt that that the use of smartphones led to student distraction or indiscipline in the classroom, but there was a general sense amongst teachers that there should be more educational initiatives for teaching staff to help them make better use of the devices. Her presentation reinforced a point that came out of the MoLI session on the previous day, that there are often social justice arguments for mobile learning, when learners’ only access to the Internet is via a mobile device.

Dr Lisa Law of Hong Kong Baptist University recounted her experiences of using a flipped classroom approach for running a Small Private Online Course (SPOC) on teacher training where FutureLearn was utilised as the VLE. She described how different mobile apps such as Kahoot!, uReply and Padlet had been used to augment the face-to-face components of the course and demonstrate active learning principles. Dr Dean Cristol wrapped proceedings up with a session on factors influencing teachers as digital citizens, suggesting that teachers’ ‘ability, competence, and belief in using the Internet should be actively considered in teacher preparation programmes and professional development’ in order to better equip them both as digital citizens themselves, and for teaching their students.

I gave my first poster presentation on this day too, talking about City’s journey towards wireless collaboration so far (as shown above; full poster available here). Standing in front of the two flipchart boards my poster was tacked onto, I explained the demand we had identified (see second post in this series for more), what we’d learned about trying to facilitate the means of wireless content sharing, how we came to settle on a technical solution, and details from our Civil Engineering case study (see first post in this series).

As I spoke, I picked up on plenty of nods from the assembled participants. Most seemed to have tried to present wirelessly but had experienced difficulties, including, at points, speakers at the conference itself. I also got nods of agreement to the challenges of aiming for a platform-agnostic solution, and of integrating securely with the institution’s WiFi network. It was good to be able to situate my own work amongst a relevant community of scholars, and to also be able to make a contribution to my first international conference outside my own continent.

Being mobile in America

I arranged a change in my tariff with my mobile provider before I left to allow me to use my phone in the US. As an experiment, I decided to record all the different contexts I used my phone for, to see what patterns emerged or if any lessons could be learned from it.

The poster itself was designed with mobile in mind, with a QR code that pointed to a case study video and a URL for a survey to be filled out in Poll Everywhere. I used the phone quite a lot for travel and wayfinding, including figuring out how to get from the airport to the hotel, getting to grips with the local trains, and getting an Uber when there was no other transport alternative. I used it to find certain local attractions too, such as the Frank Lloyd Wright house out in the expansive suburbs and the House of Blues amidst the nighttime skyscrapers. It was used extensively for communications too, from informing my wife that I’d landed and communicating with the whole conference group via a WhatsApp group, to tweeting my experiences live for UCISA and keeping an eye on work email during lulls in the conference proceedings.

When my camera had a battery that had run down or was back at the hotel, having my phone on hand ensured I could still capture the sights I wanted to. Having a connected pocket computer allowed me to conduct some rudimentary research and make some decisions on which restaurants to go to, or to find discounts at major attractions. It also allowed me to stay up to date with the latest twists and turns of the Brexit shenanigans. I noticed that, much like everywhere else, Chicagoans of all ages or backgrounds were just as absorbed in their phones as Londoners or Tokyoites. Seems these days we’re all mobile wherever we go. Interesting, then, that it’s taking so long for us to more widely incorporate these devices, these appendages of ourselves, into HE teaching and learning.

Other flavours of Chicago

Of course, another quality aspect of being away from home and at an international conference is the opportunity to take in a bit of the locality while there. I paid a visit to the former home and studio of Frank Lloyd Wright, originator of the ‘Prairie-style’ architectural movement. After a fascinating tour where I learned a lot about the man within the environment that he worked, I asked the guide what she thought Wright would make of Chicago today. Probably ‘that we’d gone too far away from nature’, she replied, a response that could probably apply to just about anywhere these days.

I went on a fact-finding visit into the city for Hambrook’s gamification workshop with my conference buddy, who taught Orbital Mechanics for the US Department of Defense. We explored themes of freedom (or the lack of) at the Chicago History Museum, at an exhibit that included artefacts from the eras of slavery and civil rights, the Japanese internment camps, and women’s suffrage. Later that day, we visited Anish Kapoor’s iconic Cloud Gate sculpture in the city’s Millennium Park, just one of Chicago’s outstanding examples of public art (see picture above; full photo album of the whole trip below). 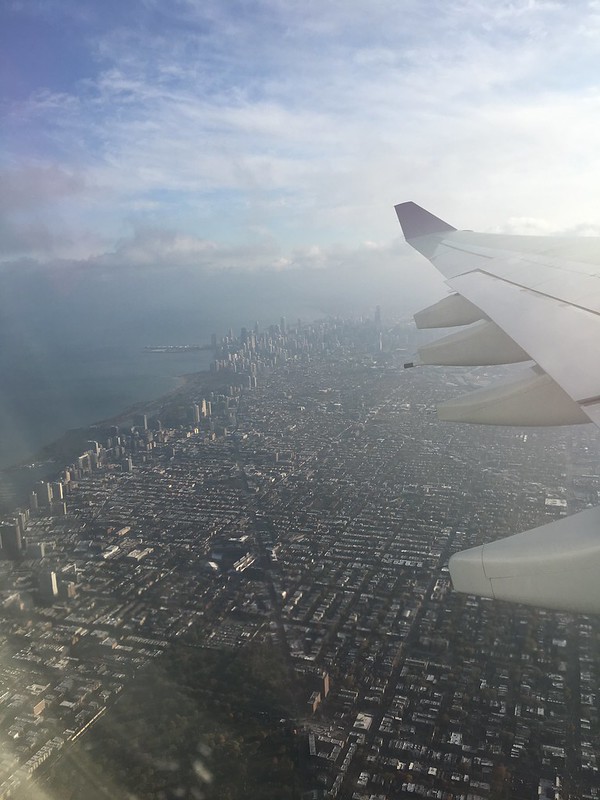 After leaving the conference, I took an Uber to the train station and headed downtown for my departure. Changing trains at the Clark/Lake intersection, I overheard a busker singing an acapella song from one of Chicago’s musical sons – a sweet and echo-ey rendition of Sam Cooke’s ‘Cupid’. It took me back to a moment in a truck on a Florida highway, heading for the airport, when Simon and Garfunkel’s ‘Homeward Bound’ came on the radio. Music can have a way of encapsulating a moment, and on hearing the busker, I resolved to dig a little deeper into the sounds of Chicago and go beyond just the blues that I knew the city was renowned for. The resulting radio broadcast is available below.

The next post is the final one in this series. It attempts to bring all the key points together and points to what’s next for bringing wireless collaboration to teaching and learning at City. There will also be an opportunity to register your interest in this emerging technology and stay up to date with new LEaD initiatives.