Live in Greece: From Constantinople to California is the latest CD released by Cappella Romana, the American-based vocal ensemble founded and directed  by City University London Senior Lecturer Alexander Lingas. It was recorded on the Greek island of Paros in September 2011 by 11 singers including Spyridon Antonopoulos, a Ph.D. student at City currently writing a thesis on the 15th-century Byzantine cantor, composer and theorist Manuel Chrysaphes. 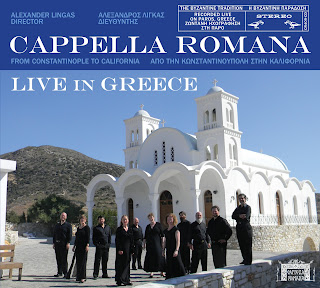 Dr Lingas chose the music featured on this disc in response to an invitation for Cappella Romana to open the 11th International Festival of Sacred Music on Patmos. Offering the musical fruits of six centuries of cultural encounters between Greek East and Latin West, it begins works arising from meetings of Byzantines with Crusaders and Venetians. East meets West again at St. Sophia Cathedral in 20th-century Los Angeles, where Frank Desby founded a tradition of Greek-American choral music with his Californian colleagues. The programme comes full circle with the mystical ecstasy of Radiant Cloud, a sonic icon of the Transfiguration by Athenian composer Michael Adamis.

The festival concert, which was covered by national Greek television, was held outside the cave where tradition holds that St John the Divine wrote the Book of Revelation. 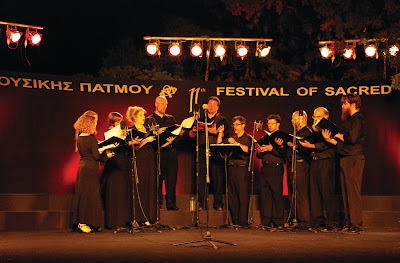 The ensemble then travelled to the island of Paros, where it performed twice: at a medieval basilica and then in the village of Aspro Chorio, where the programme was recorded by Grammy-winning producer Steve Barnett of Minneapolis and engineer Bill Levey of Seattle.

For additional information and a sound sample, click on this link to Cappella Romana’s blog.

Latest News: A plug from the Eugene (Oregon) Weekly.