This is the third post in my #ArchiveReflections series – looking back on events I’ve been part of but never got round to writing about at the time.

Last May, I was delighted to be able to co-deliver a pre-sessional workshop and attend the subsequent annual one-day Learning Environments conference, at the invitation of colleague James Rutherford. Our workshop was held at the Hermann Miller showroom in Aldwych, and the conference itself was hosted at the Royal College of Physicians facilities, off Regents Park – a curious blend of brutalist architecture, surgical paraphernalia and herbaceous gardens. James is a stalwart of this particular event, so I knew that I was in good hands in being introduced to this particular staple in the UK learning spaces calendar.

Our session was intended to build on our popular ‘Pedagogy of Space‘ workshop and was titled ‘Designing Learning Environments to Encourage Collaboration‘. You can read James’ summary of the workshop here, along with his reviews of the 2019, 2018 and 2017 events. The conference itself had a fascinating array of speakers, from architects and design consultants to academics and recent doctoral students, and gave me plenty of food for thought and helpful discoveries.

Here are ten takeaways I left Learning Environments with.

This is a rule-of-thumb I tend to employ in most workshops, as if you want a presentation, you’ll go to one: workshops are supposed to be about participant involvement. Our workshop reinforced the point nicely for me – effective facilitation of a good workshop is about providing the framework, the reflections, and steering the discussions, and it’s also very much about letting your participants get on with things. As one of our delegates stated afterwards ‘…part of the beauty, and most of the benefit, isn’t delivered by a lecturer, it is co-created by the participants‘.

Here are my pictures from the day: 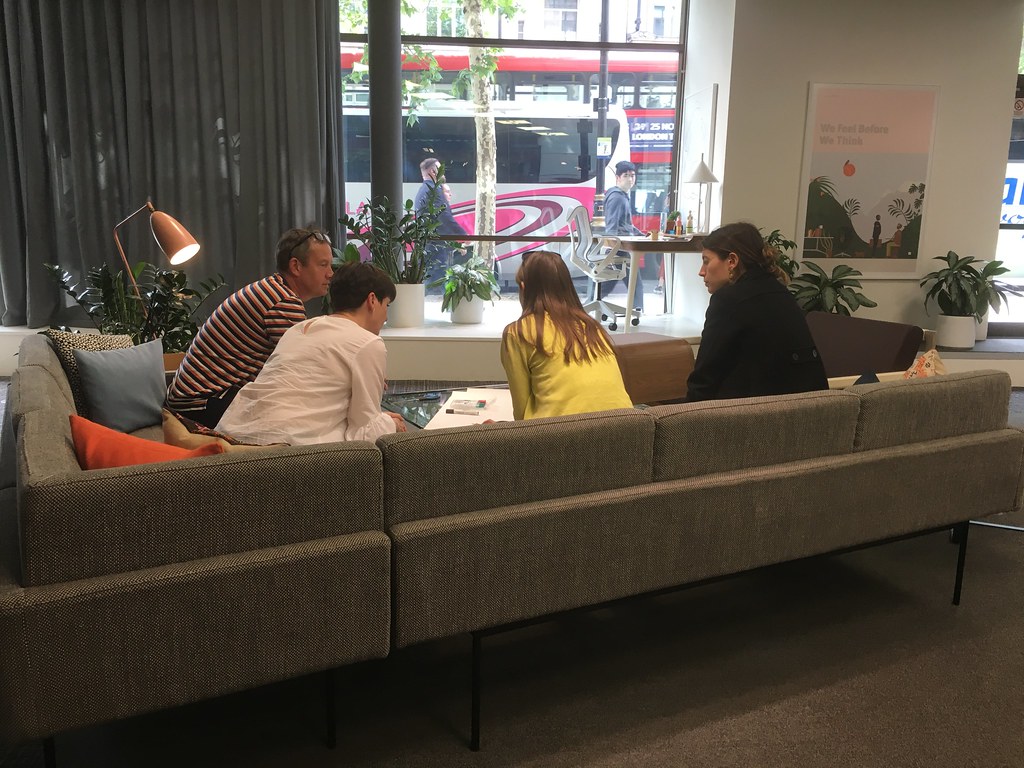 Discovered a great feature of LinkedIn during the opening plenary. Instead of people waiting till refreshments for an opportunity to network and exchange business cards, we were encouraged to open up our LinkedIn apps and use the ‘Find Nearby‘ feature (accessible from the ‘My Network’ menu on iOS). This enabled everyone in the lecture theatre to connect with each other in the swiftest way I’ve ever seen for growing one’s network in a face-to-face context. See here to learn more about ‘Find Nearby’.

Most learning spaces developments and projects that I’ve had any involvement in seem to have one thing in common. They take ages to get fully completed. Wendy Sammels – a learning spaces consultant that had worked with the University of Surrey on developing a new student services area called The Hive – recounted her case study in an early talk. She described how the whole thing, from idea to opening, was done in six months. It was very encouraging to see that such a transformed and inviting space could be developed in such a short amount of time. See some images of The Hive here.

4. Thoughts on auditoria of the future

Ian Strickland gave a fascinating talk on auditoria and large lecture spaces, looking both backwards to the past and forwards to the future. If in HE we are to continue to teach our students in large groups (something that doesn’t look likely to be going away any day soon), then we must also design our lecture theatres to work well for large groups of people. Strickland described how auditoriums and large lecture theatres work best when the experience is both intimate and collective. Looking ahead, he described the lecture theatre of the future as being one built for experiences, where both analogue and digital were well integrated, where the space was both immersive and visual, and that contained certain on-demand features. As intriguing a space as that sounds, I suspect that there would be a good deal of curriculum development and learning design needed in order for many academics to be able to take full advantage of Strickland’s future lecture theatres.

This was another new one on me – ‘active furniture‘. I’d heard of adjustable desks, or standing ones, but had never come across the interface between office furniture and gym equipment before. A company called Work Trainer makes items such as deskbikes, chair balls and balance boards for the office, as a response to the health problems associated with prolonged sitting. It’s certainly an interesting idea, although I must admit that I’d personally prefer to keep physical activity distinct from screen concentration. It must be really difficult to answer an email if you’re also on a treadmill! See a deskbike in action below:

One of the presentations was titled ‘The Architecture of Wellbeing: How to put wellbeing at the heart of the university campus‘. A very interesting talk that started on the student mental health crisis but then went into different ways that campuses and learning spaces can be designed in order to facilitate higher standards of mental health. There was talk of a free survey tool that was available for measuring wellbeing on campus, but I can’t find a version to share here now (although there is a report about it here). Instead, I’ll share another discovery from the talk – the WELL Building Standard, a global rating system for wellness in buildings.

7. The birth of Imperial College

Another presentation took me back to my undergraduate days, being an alumni of the University of Brighton. In an inspiring recounting of the redevelopment of the campus’s Checkland Atrium to highly sustainable principles, Stan Stanier and Jim Wilson (who teaches on an MSc in Sustainable Design) told tales of an approach that was both designed to support teaching and to improve the student experience. Aside from the environmental credentials of the project, I was taken by the fact that an academic had been integrally involved in a learning spaces project – something that can be easy to aspire to but harder to achieve.

Two takeaways from Lauren Bell of Herman Miller‘s closing presentation. Lauren had joined James and I at our workshop the previous day, so her talk gave a chance to learn more about Herman Miller’s work. She described an alignment between measuring learning outcomes and evaluating learning spaces, suggesting that gauging impact of education through grades was actually fairly meaningless. It felt like a very useful idea that could do with further exploration.

Bell also talked about ‘designing learning backwards‘, by starting from employer requirements and working backwards to how the curriculum (and by implication, environment) could be designed to support the kinds of skills that employers are looking for from graduates. Again, another fascinating idea, but there remains a part of me that thinks that higher education shouldn’t just be about getting a job, even though I recognise that much of it is geared towards that these days. Legacy expectations from a Humanities graduate, I guess.

The next post in this #ArchiveReflections series will go a little deeper into the learning spaces theme with a collection of images of interest from various universities I have visited over the past five years.